In early September, I made my first ever trip to Oregon and Washington, flying into Portland. I spent the next day and a half visiting Kathyrn Work, a friend from MA who now lives in Portland. The first day we drove out to the Columbia River Gorge. It was a breezy day and lots of folks were windsurfing on the river. Kathryn said she had never seen the river with so much exposed sand and bars.

We didn't go to Multnomah Falls hoping to avoid the crowds. Instead we stopped at a smaller falls just off the road - LaTourelle Falls. On a 90+ degree day, it was wonderful to hang out near the spray where the temperature was at least 10 degrees cooler.

Next up was the drive to Mount Hood. The day was clear and hot, and we could see by the lack of snow that Portland had had a warmer than normal summer.
I was fascinated by Timberline Lodge - built in the 1930s as a WPA project under Franklin Roosevelt's Presidency. The construction was heavy duty and full of artistic detail, such as the carved pelican atop the stair banister, and the tiled mural with lots of animals. 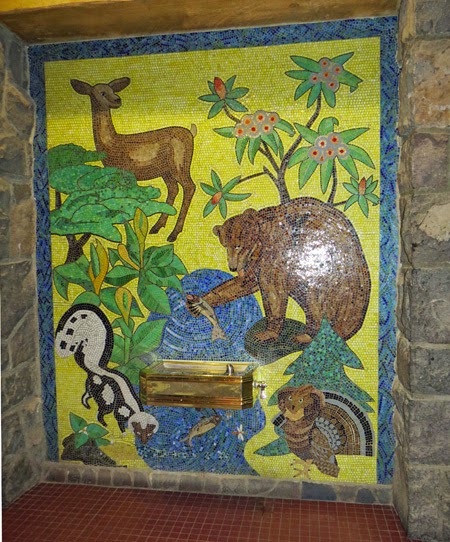 We weren't really doing birding but I did see a Western Scrub Jay and several Steller's Jays.

On the way home, we made a quick stop at the Rhododendron Garden just before dusk.
The next morning, Kathryn and I got up early to visit the Japanese Garden during members hours. It was serene and peaceful, with a few hints of fall color beginning to emerge.

After we left the Garden, Kathryn and I went to the Portland Audubon Sanctuary to meet up with hipster birders Nick Martell and Maureen Leong-ki who moved to Oregon last April. They are living in Salem, with Maureen working at OSU as an academic advisor and Nick now working at Oregon Health and Science University in Portland.
It was rather quiet at the Sanctuary, bird-wise, but I did see my first two life birds of the trip - Pacific Wren (split from Winter Wren) and Chestnut-backed Chickadee. Just before we left, we had a nice feeding flock of songbirds, including Townsend's Warbler, Wilson's Warbler, Hutton's Vireo, Warbling Vireo, Yellow Warbler and Black-throated Gray Warbler.

AAfter lunch at a Chinese restaurant in Northwest Portland, Kathryn and I headed to the coast. She drove me out to Rockaway Beach to Twin Rocks Conference Center, where I spent the next 5 days on a Road Scholar Birding Program sponsored by Portland Audubon. Stay tuned for Part II!!
Posted by Diana Churchill at 1:49 PM