Went to Tybee North Beach this evening right at the 4:30 pm high tide. Although it was only a 6.5 foot tide, there were still plenty of shorebirds resting on the beach with gulls, terns and skimmers. At first, there was no sign of the Snow Bunting, but at about 5:15 Helena Wood called out that she had just seen a different bird land. Sure enough, it was our little buddy. It hopped and walked about in the lovely evening light. I was able to get lots of pictures as the bird kept landing closer and closer to where I was standing.
Looking at one photo of a Black Skimmer skimming, I noticed that the bird has a green band. I don't know who is banding skimmers but would be grateful for any information.  Cheers,  Diana. 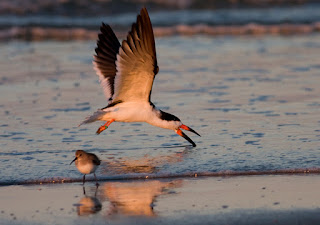 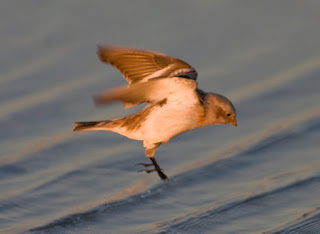 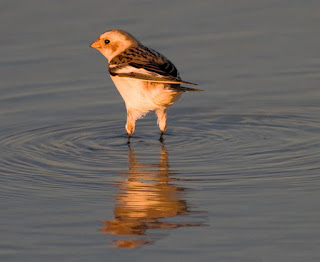 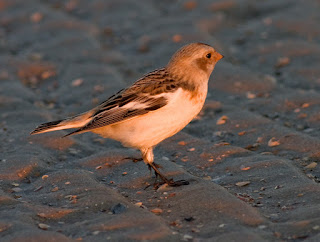 I went out to the North Beach on Tybee this morning at high tide, to scout a little for the shorebird survey, hoping to beat the rain. It was overcast and there were lots of birds on the beach - 41 American Oystercatchers, hundreds of Black Skimmers, and lots of small flocks of shorebirds resting at high tide. I had found 14 Purple Sandpipers, as well as Ruddy Turnstones, Western Sandpipers, Dunlins, Short-billed Dowitchers and Black-bellied Plovers. I walked over to check out another small flock that had about 30 Semipalmated Plovers, as well as Dunlins and Western Sandpipers when I spotted a small bird that wasn't a plover. I was thrilled to find this winter plumage snow bunting hanging out on the beach. It hopped about on the beach, flew with the flock a couple of times, and landed back on the beach.
I watched it for about 15 minutes. Finally, it flew off alone in the direction of the dunes and I was not able to relocate it. I thought it might have gone up to the pond area so I checked that area but no luck. Hopefully, with all the eyes here for the Shorebird Survey and the GOS meeting, we'll be able to find the bird again.
We'll look again when we are doing the survey at high tide tomorrow morning.
Just as I got off the beach, the first raindrops were falling.
Cheers,
Diana Churchill 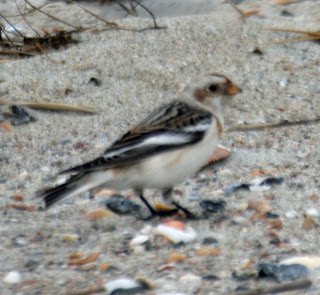 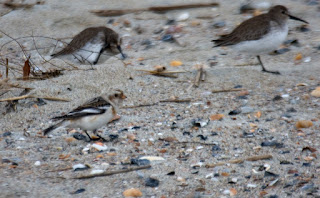 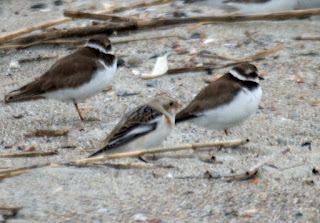 Posted by Diana Churchill at 8:43 AM 2 comments:

I went to Midway to the home of Jim and Elizabeth Smith in hopes of seeing the white bird that Jim thought might be a McKay's Bunting, based on his experience with this species in Alaska. The bird had been hanging out on the ground under their feeder with a flock of Chipping Sparrows. When I arrived, the bird had flown up into a tree near their driveway so the only photos I got were looking at the bird from underneath. It looked snow white to me. Nancy Crosby and Jim reported that when the bird flew it had dark wing tips, and that there were grayish dark markings near the nape of the neck. I did not see any of this. We stayed until nearly 5 pm but the bird never came back to the ground. Nancy and her husband John plan to return tomorrow and hopefully get other photos. Cheers, Diana 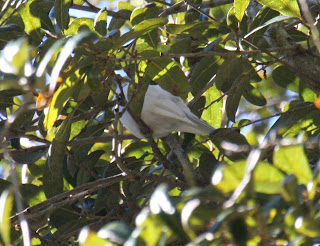 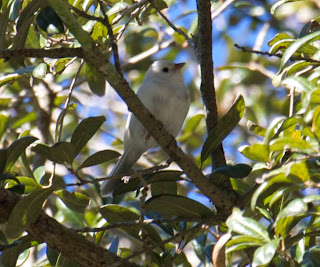 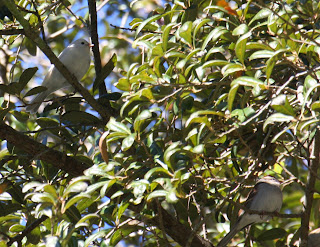 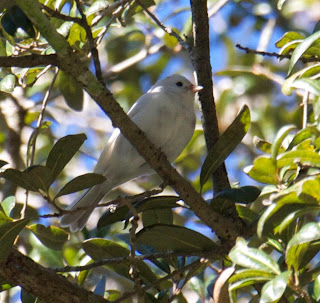