Birds on the Beach

I got out to Tybee North Beach both yesterday morning and this morning to take advantage of the over 8 foot high tide which pushes the birds up on the beach. At the point, there were birds massed on the beach as far as the eye could see. WOW! Every so often a walker or jogger would disturb them and a cloud of birds would fill the air. There were large numbers of royal terns, Sandwich terns, laughing gulls, ring-billed gulls, herring gulls, black skimmers, brown pelicans, and more. 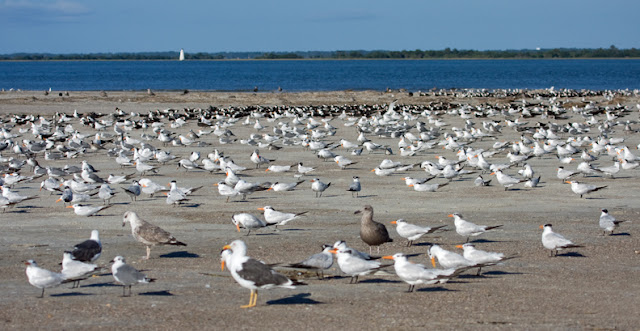 I was surprised to find both common and Forster's terns present. Am still working on getting this ID straight, particularly with breeding or alternate plumage birds. Once the Forster's has its black eye patch, I am fine. When the common has its dark carpal bar and white forehead with black nape I am fine. Here are a few photos for your perusal. Comments are welcome!


There were also many Caspian terns present - soaring about and squawking with that raspy voice of theirs.
Also found two banded American Oystercatchers in the flock of 42. Red K6 was banded on Wolf Island NWR, GA Oct. 25, 2010. Yellow N4 was banded on Nantucket Island, MA in the summer of 2007. It has returned to Tybee every winter since. 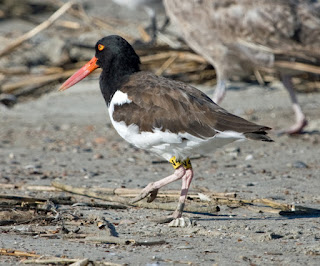 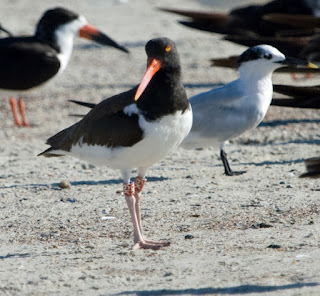 As I was leaving, I spotted a flock of some 15 black-bellied plovers, some still wearing part of their fancy breeding costumes. With them were four short-billed dowitchers and a ruddy turnstone.

Then I found a single western sandpiper hanging with a group of sanderlings. Altogether it was beach time well spent.

Posted by Diana Churchill at 11:44 AM