After nearly 40 years, Worldwide Camera in Savannah is closing. I appreciate the support I have received for my photography through the years from owners Pam & Tom Coffer. For nearly three years, 15 of my photos have hung on the wall outside their shop. Now these images need new homes.
They are 16x20 photos, framed to 24 x 28 in simple black frames with white mats. We are asking $100 per framed photo, but no reasonable offer will be refused. You can stop by Worldwide or contact me at dichurch@bellsouth.net.

Here are the images:


Here are a couple of examples of how they look in the frames. 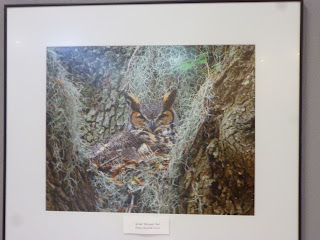 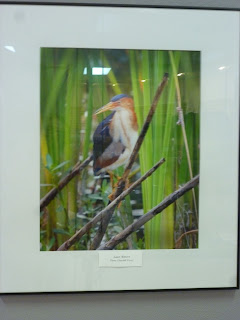 A "Ruff" day on Tybee Island

I spent the day birding with a woman from Vermont. We ended in the evening on Tybee Island North Beach and walked up to the little pond near Polk Street. We had just seen a greater yellowlegs on the beach as I stared at a yellowlegs-like bird with white around its face, a heavily patterned back, and a beak that just didn't look quite right for a yellowlegs. I thought "ruff???" and checked my Sibley Eastern but the pictures just didn't match up. I took several photos.

When I got home, I consulted the Shorebird Guide by O'Brien, Crossley and Karlson and found a photo of a juvenile ruff that showed the white around the face and patterned back. After a brief interlude to complete my checklist and upload photos, I headed back to the pond where the bird was still hanging out.

I was able to get one other birder, Joel Ludlum, out to see the bird. It hung around until just before sunset and then took off towards the beach in the direction of Ft. Pulaski.

The first time I watched the bird, it flew to the side of the pond where the light was good.


When I returned, the ruff was still there but hanging out on the shore where it was backlit. Still very nice looks though.


For an extra bonus, my first of the season Gray Kingbird showed up on the railing and did some flycatching over the pond. What an evening!

I arrived in Panama late on Friday night, January 8th. At the Riande Airport Hotel, I was greeted by my good birding friend Lainie Epstein. She led the way to our second floor room and informed me there was no elevator as we lugged my bags up the stairs.


The next morning, I was up early and looked out the balcony. The first bird call I heard sounded like a robin. It was, in fact, a Clay-colored Thrush - close relative of the robin.


After breakfast at the hotel, I was thrilled to get to see a Panamanian friend. Darien Montanez spent a year in Savannah in 2005 getting his Master's in Architecture at SCAD. He is also an avid birder and I used to pick him up at his dorm for Ogeechee Audubon field trips. Darien now lives in Panama City, teaches some architecture classes, does architecture, and has a new full-time job at Panama's new BioMuseo.

Darien and his brother Camilo came to the hotel and took 8 of our group across town to the Metropolitan Nature Park for our first Panama birding experience.

The Park is a 265 hectare forested park with several trails and was created in 1985 to preserve some natural habitat near the Panama Canal. Here are a few of the birds we saw during our visit. Darien was calling out names of birds that he heard, and I felt like a new birder all over again.

At one checkpoint, a guard checked our tickets and then led us over to a nearby tree and pointed up.
There snoozing like an extension of the branch was one of two species of Potoos that are found in
Panama. They are nocturnal, like our whip-poor-wills and chuck-will's widows. This one is the Common Potoo.

We saw two species of Euphonia - Thick-billed and White-vented. Darien was excited about the White-vented as that one is seen less frequently. Euphonias are small and colorful.

As we walked back to the cars in the now sweltering heat as it got close to noon, Darien spied an American Pygmy Kingfisher perched in the shadows on a branch low over the water of a small pond.
It was a very satisfying as well as frustrating morning. I re-discovered the challenge of photographing birds in shady forest, and the challenge of hearing and seeing lots of unfamiliar birds.
Posted by Diana Churchill at 1:05 PM 1 comment:

Larry Carlile called me about 3 pm on Wednesday, Nov. 25th. He had found what he believed to be a Ross's Goose at Lake Mayer. I was at work at Wild Birds Unlimited, but thanks to the co-operation of my co-worker Nicole, I dashed over for a look.

It was definitely petite - much smaller than nearby Canada geese and mallards. The head was all white and rounded, neck short, and bill small. However, it did seem to have more of a grin than Ross's is supposed to show and there is a bit of a curve visible particularly on right side of margin between beak and head. The top and sides of upper bill are covered with warty growths - caruncles - which I read are typical of older male Ross's geese.

Posted by Diana Churchill at 8:40 AM 2 comments:

Well, finally it stopped raining and this morning I hit the beach early. I didn't find any Franklin's Gulls but there is always something interesting to look at. This morning the Sanderlings, Willets, and Ruddy Turnstone were frantically feeding on something - perhaps a horseshoe crab nest?
Skies were overcast early but still fun to see this behavior.

Steve Calver showed up and we were studying the birds when four ducks flew over - flapping fast!
I put the camera up and got off a couple of shots. My first thought was Hooded Mergansers.
When I looked at the photos, there were three mergansers and one different duck with a rounded bill.
Steve's first thought was Black Scoter but on inspecting the photos, I noticed that there wasn't any light color on the face, the belly was light, and there seemed to be white patches on the trailing edge of the wings. What do you think? Female bufflehead? Female common golden-eye?

After lunch, Brenda Brannen, Sandy Beasley and I went to Fort Pulaski looking for Brown Creepers and Sedge Wrens and anything else we could find. In the pine grove at the picnic area things were hopping with Eastern Bluebirds, Brown-headed Nuthatches, Pine Warblers, sapsuckers and more. We kept hearing a high-pitched call and finally found a couple of Golden-crowned Kinglets actively feeding in the pines.

When we went over to the field behind the Fort to look for sedge wrens, we spied a brown bird walking in the grass. Our first thought was Eastern Meadowlark. However, when we got closer, it turned out to be an American Pipit! Unlike the meadowlarks, it allowed me to walk close for photos!


Standing on the dike, we could hear at least two Sedge Wrens calling but they were being very elusive. Next, we had a long walk with few birds. Sandy and Brenda left but I kept birding, continuing on the path behind the Visitor's Center. At the end of the path, I started pishing in the wet area where I had previously found Sedge Wrens. This time, the wren that popped up was a Marsh Wren.
Walking back along the path, I glanced up and saw a small flock of Cedar Waxwings - my first of the season. It was fun to see a streaky juvenile in with the group. They were dropping down into a yaupon holly that was loaded with berries.

Of course, the local mockingbird did not want any other bird messing with its berries!
Next, I made one more long walk back out to Sedge Wren territory. I flushed a Wilson's Snipe, and the American Pipit was still where we had left it. This time, the Sedge Wren responded to pishing and to its call, coming out to pose for photos!

All in all, it was a fine day of birding! Great to have sunshine after two days of rain.
Posted by Diana Churchill at 6:14 PM No comments: